As per “Siddha Dharma”, Chamunda primarily is a Tantra Vidhya and is tamasic in nature.  She is also a warrior goddess who defeated Chanda and Munda, the two generals of Shumbh and Nisumbh as mentioned in Devi Mahatmya. She is believed to be the goddess of war and victory. She is portrayed as a goddess who is hit with malnutrition and has remained hungry for long. She is someone who is also portrayed with eating intestine.

As per “Siddha Dharma”, Chamunda Devi is Tantric Vidhya to subjugate two default attributes of every human, the Chanda, and Munda vritti.

As per “Siddha Dharma”, the word Chamunda is composed of two words, Chanda + Munda. Since she won the generals Chanda and Munda of Shumbh and Nisumbh, she was adorned with the name “Chamunda” or the slayer of Chanda and Munda daitya.

Furthermore, Chanda daitya was “Chanda Vritti” personified while Munda was conspirer personified. Therefore, the synthesis of those two words gives the meaning that Chamunda is such a powerful goddess that she is invoked and worshipped mainly to win daityas who were cruel and conspirators. She is also worshipped to tame the inner “Chanda and Munda” vritti. When a person manages to tame these two traits, the person then attains “Devatva” or becomes god likes in virtues.

As per “Siddha Dharma”, she is portrayed as a goddess who is very lean and is suffering from malnutrition such that her skeleton framework is very distinct for the perceiver. Her abdomen is inside and is functionless because of sustaining prolonged hunger. She is portrayed sitting on a top of “Panch Munda”. She is portrayed with eight hands, four on each side.

As per “Siddha Dharma”, the four hands on the right side hold khadag (sword), damaru, khatvanga, and skull cup while the left side hands are portrayed holding shield, vajra, hook and kapal bindu mudra.

There is two origin story of Chamunda Devi. One is the regular one that is mentioned in Durga Sapta Sati or Devi Mahatmya and the other one is the “Agama-Nigama” story.  The agama-nigama story depicts her as one of the “Tantra Vidhya” while the Devi Mahatmya mentions her as Chamunda goddess, the slayer of Chanda and Munda.

The whole incident makes Ma Parvati contract her eyebrows and looks at Bhagawan Shiva with her jaw drops (awaka mudra). She then rests the palms of her both hands on the ground in a position to stand up and defend herself if Bhagawan Shiva loses his cool. Many thoughts are going on inside the mind of Ma Parvati. Bhagawan Shiva staring at her in a very pensive way says to her if she can keep her mind calm and thought-free as he senses there are a lot of things going inside her mind. Ma Parvati is scared to the core and in a trembling voice replies the way Bhagawan Shiva observes with those pensive attitudes, it for sure invokes many thoughts inside her. She then proceeds to enquire Bhagawan Shiva as to why he is perceiving her that way to which Bhagawan Shiva replies that he has nothing inside him going on as Ma Parvati perceives. He further continues that he is unattached from inside nor outside, he is neither pensive nor angry. He is just performing trataka and is in a state of continuous dhyana.

He further continuous that he is unattached to anything therefore, he has nothing inside him but he points out to her and says that she has two daityas inside her and they are Chanda and Munda. He refers to the left eyebrow as Chanda and right eyebrow as Munda. Ma Parvati is amazed and she wonders as to how. No sooner two lights emerge from her eyebrows and merges in the air and takes the form of a Vidhya known as Chamunda Vidhya.

As per “Siddha Dharma”, after Bhagawan Shiva leaves her, the adornments of Ma Parvati fall and she rests there motionless and in observer mode, she observes Chanda and Munda attributes inside her. She abandons food, water, adornments, and any forms of outer activity. She gradually becomes thin, her skeleton framework could be seen distinctly and because of her prolonged hunger, her tummy is tucked completely inside. She then keeps waiting because her Chanda and Munda attributes are annihilated. She reaches the state of Siddhatva and Bhagawan Shiva approaches her and lets her know that she has perfected Chamunda Vidhya. She then assumes her original form and she perfects her another form. After that, both become antyardhyana.

The origin story of Devi Mahatmya that is going to be explained is based on “Kaula Siddha Dharma”. It considers the first and foremost authority for the origin of Chamunda Devi to be mentioned in “Durga Saptasati” in the public domain. It is a book authored by Veda Vyasa and Mahasiddha Markandeya Nath is the main protagonist of the book. He explains in the book that there was once a daitya, Sumbh, and Nisumbh. They had won the three worlds. They had conquered everything and collected all the precious things in this universe. They ruled for a very long time and they were looking for new pursuits. They had to be annihilated anyhow.

As per “Kaula Siddha Dharma”, all gods and goddesses donated their energies and all their energies fused to form Goddess Durga and Ma Parvati then fused her form to create the Durga Devi. Devi Kaushiki is also the other name of Goddess Durga. Devi Kaushiki when came to the notice of the daitya king ordered their generals to bring Kaushiki to him. The generals Chanda and Munda went to Kaushiki Devi and ordered her to accompany them. The Devi agreed but with a condition that she will only marry the person who wins her in battle.

As per “Kaula Siddha Dharma”, Mahaguru of Daitya, Mahasiddha Sukracharya had prepared Chanda and Munda in such a way that they defeat the gods. Chanda daitya was the epitome of Chanda vritti because gods cannot defeat extreme Chanda vritti and cannot outsmart overt Munda vritti. Sukracharya had prepared them to such extent that they do not be defeated through the hands of god at any cost and he was successful too.

When Chanda and Munda attacked Ma Parvati’s form, Kaushiki Devi. She again contracts her eyebrows and from them emerged a Shakti, Chamunda Devi. The same Chamunda who had starved herself emerges out and in the plight of that hunger, she starts to devour the daityas. She begins to consume those Daityas along with her accompanies. The Chamunda Vidhya which Devi had perfected emerged out of her body, devour Chanda and Munda and then becomes one with the body of Kaushiki Bhagawati.

When all the Daityas had been killed, only babies of the Daityas remained.  She then became compassionate and then she grew her breast and made it round. From her breast, milk started to flow and it fed the baby Daityas. Therefore, she is then revered as Patala Chamunda.

Chamunda Matrika is a motherly goddess who not only destroys the Chanda and Munda vritti but also protects the sadhaka from negative energies.

The Guru-Disciple tradition of Chamunda Devi

As per “Kaula Siddha Dharma”, the Vidhya started from Bhagawan Shiva himself. He imparted this Vidhya to Ma Parvati himself and from her. Saptarishi, Siddhas received it. It was practised and preached by various Rishis like Kashyapa, Parashara, etc. Like all other Vidhya, it had also gone to the stage of hibernation. It was Mahasiddha Matsyendra Nath Ji who revived this wisdom in the modern age. 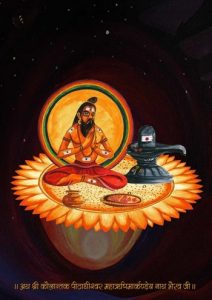