It is not clear about the first origin of Kālī. When there was no time or place, when there was nothing, not even the idea of nothing, then there was Kālī. So it is unfathomable to describe her fully or know about her origin.As per Siddha Dharma, there are three main esoteric tantra stories related to the origin of Kalika.

This is the story of the time even before Sati, the consort of Shiva was born. Shiva at that time was established as Avadhuta Rudra. The tradition does not talk about the place or time for this event. It was before the fourteen loka or bhuvana were created. It was even before the time of humans or Devās or any manifested divinities. During this time, once Shiva got in the state samādhi in śavāsana. Śavāsana Rudra then had an imagination to create the universe.Then his energies ascended from navel center to the heart center or anahata. From the heart centre, Kālī manifested with her known form of tongue sticking out. The tongue sticking out also meant that Kālī consumes her own energies. This is known as svarasapāna. It also siginified experiencing onself in Khechari Mudra. This is the esoteric story in the Yoga Āgama about the origin. Yoga Āgama is the conjoint form carrying both tantra and yoga traditions.

In this version of the story about origin of Kālī, it is said in Siddha Dharma that once Pratyāliḍa Kālī become effulgent in her own tejas or aura and transformed into the agni form of standing fire tower of infinity.  It was during the purānic story about the fight between Vishnu and Brahma. This was the initial times of the creation of the universe. Vishnu and Brahma both thought of themselves as the supreme being and quarrelled with each other to prove their superiority. Then this tower of infinite fire manifested amongst them. This was the tejas of Kali herself. This fire tower is known in tantra as Jaṃ Khaṃ Brahma or Agnistambha. Esoterically, Brahma represents the intellect and Vishnu represents the heart. Rest of the story we know about how Shiva spoke through Kali , asking both Brahma and Vishnu to prove their superiority by finding the end of this fire tower of infinity. But both were unable to find the end of Kali in the form of agni or fire tower.

This is the famous story about origin of Kali as is present in Markanḍeya Purāṇa. This is the story about how Bhagawati manifested her form as Kālī for fighting the asura named Raktabīja. Raktabīja would manifest other Raktabīja forms with each blood drop that spills of the ground. So to stop this seemingly endless battle with the asura, devi took the form of Kālī and drank the blood of Raktabīja. But after killing this asura and drinking all his blood, Kālī become frenzied. She began to consume the whole universe. It was then that Shiva pacified her and calmed her down.

The tradition of Kaulantak Peeth and Kālī

It is one the greatest and most profound sadhana in Kaulantak Peeth. The arrangements and the empowerment is meticulous and elaborate. It is more elaborate than a full fledged marriage ceremony in traditional hindu ways. While most part of empowerment on Mahavidya Kali remains mysteriously hidden from public view, some are documented in a limited expressions during the covid 19 pandemic times of 2021.

The main three forms of Kālī are

Although Siddha Dharma enumerates 300 forms of Kālīkā. But there are eight main forms that are given emphasis. They are known as Abhyāntarī bheda of Kālī.

Based on color, Kālī is grouped as Varṇamayī Kālī. They are Nīla Kālī,  Pīta Kālī, Śyāmā Kālī, Rakta Kālī, Śveta Kālī and others. Most tantra books talk about Rakta varṇā Kālī or Śyāma varṇā Kālī. But Mahā Nirvāna Tantra talks about Kālī as of fully black color. Another form of Bhagawati is Dakshiṇa Kālī. Her name as Dakshiṇa Kālī is formed because of the association with Lord of Death Yamaraja.  Yamaraaj is the lord of the southern direction or the dakshina dishaa. He is suppose to take all to the yamaloka but he spares the devotees of Kālī. This is the reason she is also known as Dakshiṇa Kālī. Also, the dakshina or the alm that is given after yagya to brahmana, gurus and such are considered as food of Kālī or Kālīgrāsa. Without this Kālīgrāsa, no ritual is complete. Kālikā returns the dakshiṇā offered to her by showering her grace manifold. This is also a reason for her name as Dakshiṇa Kālī. She is known as Dakshiṇa Kālī also because Dakshiṇmurti Bhairava doing stuti prayers of Kālī. Also women are called as vāmā and men as Dakshiṇa. When this vāma shakti establishes herself over men denoted as Dakshiṇa thensuch women are called as Dakshiṇā. This is also the reason why Kālī is known as Dakshiṇa Kālī.

The mentioned chapters are 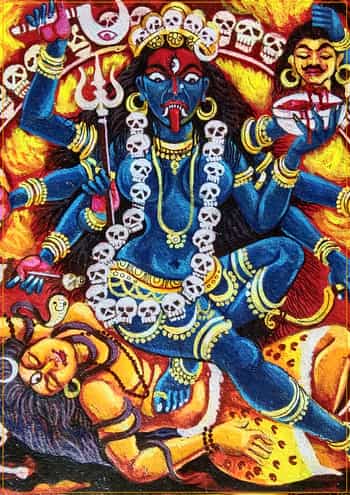