Kumari, or originally Kumarika, is the fundamental tradition of Shakta Tantra tradition where a young girl transforms into a vessel of the divine Goddess in the gross material reality.
Kumari tradition is a tradition of Pratika Upāsanā or symbolic worship of Devi, the divine feminine, the Shakti or conscious energies of the universe.
In this tradition, a young girl is selected who has the sacred qualities and qualifications, then she is trained through a defined education system to transform into a vessel or medium through which the subtle dimensional Shakti of Goddess can manifest and thus making the young girl a Kumari or the Goddess in human form.
As per “Siddha Dharma”, a prepubescent female child up to the maximum age of twelve is selected based on traditional criteria. Then the goddess Yogmaya is invoked in her such that she is transformed into the vessel of Goddess.
After the goddess is invoked, the selected girl is often looked upon by the people as living goddess. They treat her to be the supreme goddess in the human form. They seek her blessings and invite her presence as the the central figure of all their public and private functions.

As per “Siddha Dharma”, Kumari implies prepubescent female child who has not shown any signs of puberty. She has not reached menarche or she has had her first menstruation period. When she hits menarche, she ceases to become kumari and a new female child in her prepubescent years is selected for the goddess to be invoked in her body. The highest year a Kumari attains is the age of sixteen but only if she hasn’t attained menarche. Even after the age of sixteen, if the Kumari has not hit her menarche, she automatically ceases to be Kumari for worship purpose. If she never hits menarche, she can use the title of Kumari but not for worship purpose.

The symbolic worship of Kumari as Goddess in human form began in Kashmir. Siddha Dharma says that the first Maha Siddha to do Kumari worship ritual was Maha Siddha Gajapati Nath. The Kumari Kalpa manuscript informs us about how the Maha Siddha Gajapati Nath, who was an expert at alchemy was taught the ways of Kumari tantra ritual from the first Kumari who manifested through his alchemical or rasayana murti of Goddess Laxmi which merged in a young girl. The detailed conversation between Maha Siddha Gajapati Nath and this young girl in Kashmir who was the first Kumari is described at length in the manuscript of Kumari Kalpa.
Through the regions of Kashmir, this Kumari Kalpa Tantra went into different regions. One stream of wisdom tradition then went towards Bhoṭadesh (present day Tibet) and another stream went towards Kāmarupa desh (present day Assam).
It was this wisdom tradition from Kāmarupa Kāmakhyā, that reached Nepal.
In present times, the tradition of Kumari which travelled from Kashmir to Tibet reached Nepal and got mixed with the tradition that reached via Assam. In its mixed form, one can see certain aspects of this Kumari Kalpa Tantra worship rituals in different parts of Nepal.
The Pancha Kanyā worship ritual, the Bālikā pujan at various auspicious occasions and various aspects of Shri Vidya rituals in southern India derives also derives from Kumari Kalpa Tantra systems of Siddhas of Himalaya.

Kaulantak Peeth has a very long history of Kumari tradition. Here, Kumari has been known as Parama Kumarikā. However, since it was free from control of kings and their rule, it never got the same limelight as in other places.
In Siddha Dharma, the guru disciple tradition reveals about the origin of Kumarikā sadhana begining in Kashmir. Maha Siddha Gaja Nath, a great siddha expert on alchemy and rasayana tantra, due to his great merit and sadhana was blessed by Yogamaya in form of young girl. This girl was the first Kumarikā in the world and it was her who established the Kumarikā tradition through Maha Siddha Gaja Nath in Himalaya which later permeated across whole Himalaya.

As per “Siddha Dharma”, the supreme goddess Yogmaya in her Lalita Tripura Sundari is comprised of three forms, Bala Tripura Sundari, Shodashi and Lalita Tripura Sundari. The goddess in her prepubescent years is considered to be Bala Tripura Sundari, from the age of twelve to sixteen, She becomes Shodashi or the goddess with sixteen virtues and finally Lalita Tripura Sundari, the fully mature Rajasic goddess.
In Kathmandu and the Kumari tradition, the prepubescent female child is selected from the family of the shakyas and in her, the Bala Tripura Sundari is invoked such that the female child transforms into Bala Tripura Sundari, the Shree Vidhya. She is then worshipped for the prosperity of the state, for the citizens and for the progress of both public and private spheres of human’s life because Bala Tripura Sundari is believed to bestow all forms of material wealth to her worshippers. She bestows wealth and also states to her worshipper therefore from time immemorial, She used to be worshipped especially by kings. Therefore, the kings of Nepal maintained a royal Kumari.
In the case of Kumari, it is quite different. In Nepalese culture especially in Kathmandu, when the kings predominantly ruled the Himalayan country, the public spiritual gatherings took in the form of jatra like Kumari jatra or Kumari festival. The jatra was attended by both, the king of Nepal as well as Kumari. The whole jatra used to take place in their forefront. Such public event would be deemed incomplete without Kumari watching from the stand. She was the essence of such public gathering and not the king because although the king and Kumari might have equal standing but it was the king who would bow down to Kumari and not the other way around.
In the Kumari tradition, people would visit Kumari for prosperity in both the public and private spheres. The king would worship Her for powers and the protection of the state along with the citizens. She would also be worshipped by the citizens for better harvest, for the rain, etc. Every year there would be a spiritual function where the Kumari would offer her sword to the king also known as Khadga Siddhi. With the abolition of monarchy, the tradition of Kumari exchanging the sword with the king of Nepal has now ended.

The evolution of the universe before the creation took its present form, is esoterically explained in Kumari Kalpa as a process that happens in sixteen stages. These are the sixteen stages through which a Kumari progresses, from being born, to be raised as an infant, and ultimately reaching the full bloom of youthful stage. This is also the journey of Yogamaya transforming Herself into Mahamaya.
1.Sandhya
2.Sraswati (Gyanmayi Srishti)
3.Tridhamurti
4.Kalikaa
5.Subhaga
6.Parvati
7.Malini
8.Kubjika
9.KaalaSandharva (Gati Srishti)
10.Aparajita
11.Rudrani
12.Bhairavi
13.Mahalaxmi
14.Pithanayika
15.Kshetragya
16.Ambika

Prerequisite for being Kumari

As per “Siddha Dharma”, for a female prepubescent child to be selected as Kumari, she has to have certain qualifications. These qualifications range from esoteric tantra signs that manifest in human body to the psychological maturity of the young girl.
It could be explained from the selection procedure of army, where both men and women have to satisfy physical standards and pass some tests before being selected into army.
The Kumari also have some prerequisite that has to be satisfied before a female child is chosen. Some of the qualifications are:
1.She should have an odd number of teeth at the time of selection.
2.Special signs and readings of hand and legs are observed.
3.She should be pre-menarche.
4.Selection is also done for physical presence and healthy body
5.She should be born in Deva Lakshana Nakshatra or ten godly nakshtra should be present in her birth astrological chart.
6.By asking for divine revelation from Ishta or presiding deity of the tantra tradition. In Kaulantak Siddha tradition, one asks with prasna or sacred tantrik dice.
7.She should be fearless. Gurus tests with masked bhairava to see if the potential Kumari gets scared.
8.She should be calm by nature.
9.She should be relatively more intelligent and mature than other children of her age.
Apart from these tests and qualifications, Kumari Kalpa manuscript available with Kaulantak Siddha tradition reveals many esoteric qualifications of a suitable girl who can be a vessel for the Goddess and become a Kumari.

As per “Siddha Dharma”, the current Kumari is Kumari Kamakshi Nath Ji who hails from Assam. She had been anointed Kumari in the year 2015 and is believed to be the first authentic Kumari. Only in her  absence, other girls could be anointed Kumari for any function but they cannot replace Kumari Kamakshi. They will only serve as temporary Kumari.

As per “Siddha Dharma”, it is mandatory for the parents or guardian to give their consent for their girls to be Kumari. Their parents or guardian shall also have to consent to look after the Kumari after she has been anointed and for the time span of her Kumari years. 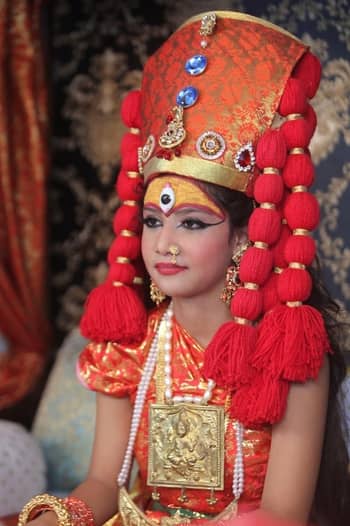 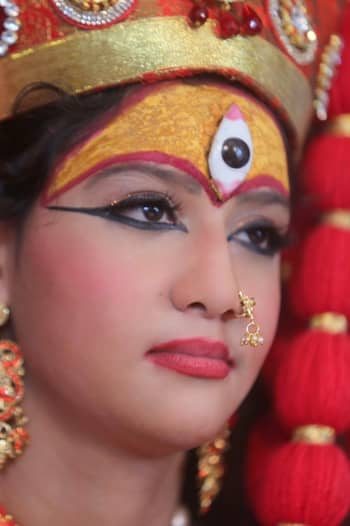