Bhairavi Mrigakshi is believed to be the topmost Bhairavi in today’s day and world. She is the current Peethadheeshwari of Mrikula, one of the most secretive tantra tradition. She is the disciple of Mahasiddha Rasa Nath. He had trained her from an early age and he bestowed her all those secretive sadhana under Mrikula ultimately making her Mrikula Peethdhishwari.

As per “Kaula Siddha Dharma”, Mrikula is purely Shakt tradition and is widely recognized as the tantra which can only be practiced in nature. The props used in the tantra are all taken from nature. For instance, we use panchpatra for water and achamani to drink water for purification while Mrikula they go nearby to a pond and break a twig from a nearby bush and use it for achamani or flowers for achamani. The natural water sources like a pond, running water becomes panchpatra for them.
The difference between Kaula kula and Mrikula is that Kaula kula is Shaiv tradition while Mrikula is Shakt tradition in its core.

As per “Kaula Siddha Dharma”, Mrikula is derived from the word Mri which means deer and Kula means tantric tradition. It is very safe to say that Mrikula has its root on the animal deer. Deer is an animal that represents feminity. Deer don’t have the virtue to be still like an ox. It always keep moving, its eyes never rest. The eyes are the symbol of playfulness.
In tantra, Shiva is described to be passive and is situated is stillness while Shakti is playful. She is always on the move. Bhairavi Mrigaksi’s name would imply that her eyes radiate playfulness, aesthetics, and bliss.
In reality, Her Holiness eyes also resembled the eyes of a deer. Furthermore, through the practise of Mrikula, she became known as Mrigakshi meaning, the eyes of Mrikula.
Her name, therefore, suggests that she is the gateway to the soul of Mrikula because eyes are the window of the soul.

As per the revelation of His Holiness Mahasiddha Ishaputra, when he was anointed as Kaulantak Peethadhishwara by the Gurumandala, their relationship took new turns. They were both so much into each other that the Gurumandala tried their level best to keep them apart and have as minimum contact as possible so that they shall walk in the path of Dharma.
Finally, after much unsuccessful attempt from Gurumandala, they decided to separate His Holiness Mahasiddha Ishaputra and Bhauravi Mrigakshi so that they concentrate on the works of Gurumandal. It was a very painful experience for His Holiness and Bhairavi Mrigakshi but both parted their ways and both undertook their own journey.

As per the revelation of His Holiness Mahasiddha Ishaputra, once when they were in the jungle in a dark night, His Holiness wished her happy birthday and he asked her what would she prefer to do in her birthday. Since they had numerous plans in their hand but not any of it would come to fruition because of the absence of light. Therefore, they decided to build a fire torch because the only thing that they possessed was an axe. They used their axe and through plants, they created a torch. Under the torch, they also practiced a sadhana.
From that day onwards, August 19 was always celebrated with great zeal. A similar fire torch is also made in the peeth and birthday is celebrated
Right after the conclusion of the birthday of Bhairavi Mrigakshi, Mahasida Ishaputra’s birthday follows.

For nearly a decade, His Holiness had Regularly conducted Deeksha shivir to impart Mrikula to local people. One such Deeksha was Mrikula Hadimba Mata Ji. The Hadimba Deeksha was performed through Mrikula. His Holiness also explained many facets of Mrikula in that camp.
Mahashaktabhishek Deeksha was also imparted through Mrikula. He first collected dried grasses and from a vessel initiated us. It is believed that the Peeth shall conduct more Mrikula Deeksha in the future. 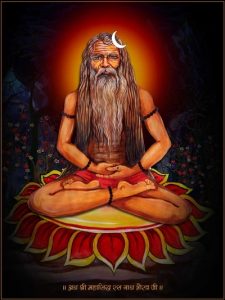 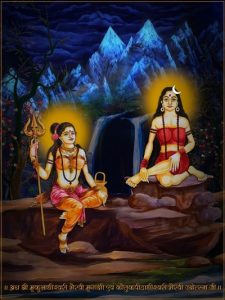