Yogmaya is the primordial shakti of this universe. At the beginning of the time, when there was only nothingness everywhere, She existed as an inseparable part of Brahma. She and Brahma are inseparable because they are the same. Brahma or Shiva is passive while Yogmaya or Shakti is that entity that is active and which runs this universe.

As per “Siddha Dharma”, She rules this universe through three modes of nature and they are Satwa, Raja, and Tamas. She is dominant in all three qualities of the universe. There is no physical or abstract corner where she doesn’t have her reach. She caused Lord Vishnu to be in ‘Yoga Nidra’ which means She has the power of impacting every level of consciousness in Universe on a subtle and abstract level. Sins or paap happens at a subtle level and not at the physical level. If paap only existed on the physical level, it would have been destroyed the very moment the physical body is destroyed. But somewhere inside us or in some corners of this infinite universe, our paap gets accumulated. The only way to cleanse or atone for your sins or paap is erasing the sins at the subtle plane of the universe. The only way to access those subtle planes and to erase those sins is through the help of Yogmaya herself.

As per “Siddha Dharma”, Paap Mochini Yogmaya is the Goddess who is omnipotent in all spheres of existence whether physical or abstract, gross or subtle and She has the power to create, rejuvenate or destroy anything inside this universe including our sins. From time immemorial, the Siddhas have worshipped Her to be free from all forms of sins and to be “Jivan Mukt” while living on this present birth.

As per “Siddha Dharma”, she is portrayed as a fair complexion Goddess who is seated upon a white lotus flower. She holds a lotus flower in her left hand while the right-hand shows the Abhaya mudra. She is portrayed in blue clothes and adorned with jewelry. She has three eyes, a moon on left part of Her head. Her hair bun is tied with white flowers. Behind her, there is a disc that has the peacock feathers along with white flowers.

As per “Siddha Dharma”, her iconography suggests that she is a fair complexion Goddess means that she is satwik in nature. The Lotus flower in  her left hand denotes wisdom and Siddhatva. She gives the ability to grasp the knowledge therefore She is not tamasic but Satwik in nature. Her body adorned with jewelry implies that she is the amalgamation of Satwik and Rajasic virtues. The Abhaya mudra which means fear dispelling mudra that implies that She frees humans from all kinds of fears. Even ‘Paap’ is considered to be one of the fears of human minds. She annihilates paap from human lives primarily by making them fearless against sins and secondly, the best annihilator of paap or sins is wisdom. Wisdom is the only way to annihilate tamas as well as paap.

She is also portrayed wearing blue clothes. The color blue implies that She can open the doors for Her Sadhak to grasp the vastness of the universe. An adept Sadhak knows when and where to take birth in which part of the universe, gain the knowledge of those universes and finally come out of the web of Maya. The peacock feathers behind her imply ‘brahmacharya’ and also tapas. It simply means that for a person to annihilate sins, the person has to observe celibacy and walk the path of tapa. Without tapa, no sins ever get destroyed. The white flowers imply adhering to satwik lifestyle. All in all, the crux of her worship is to walk on the path of tapa to destroy paap in all forms.

As per ‘Siddha Dharma’, once when Mahadeva Shiva took the form of Swachhanda Bhairava and Ma Parvati took the form of ‘Aghoreshwari Kurukulla’ in Mount Kailasha, they were engrossed deeply in the tantric conversation of Agama-Nigama. After having enquired about much wisdom, Swachhanda Bhairava reveals to His consort that She also has a virat swarupa and in that swarupa is Yogmaya hidden. She is what causes the world to be engrossed in Maya.

Ma Kurukulla then enquires as to why She is the cause of engrossment of the people. Swachanda Bhairava then replies to His consort that She rules the universe through her three modes of nature- Satwa, Raja, and Tamas. These three gunas or attributes are omnipotent in this world and are non-deniable. Each action of every human being is based on these three gunas. When they do so, they are never able to transcend the three modes therefore, it causes them to develop attachment. The attachment causes a person to develop animal instincts or Pashutwa. Pashutwa is the cause of all paap. He further reveals to her that she is not the direct cause of paap committed but people are tricked by her three modes of nature and so they commit sins.

As per “Siddha Dharma”, Ma Kurukulla then asks Swachhanda Bhairava about the solution to the problem to which Swachhanda Bhairava smilingly replies that She Herself is also the solution. He then reveals to Her that She in her virat swarup is Yogmaya and she has a particular form that annihilates Paap, sins, or vices and that form is Paap Mochini Yogmaya. She then closes her eyes, inhales through the medium of yogic technique, and transforms Herself into Paap Mochini Yogmaya.

As per “Siddha Dharma”, ‘paap’ means the identification of oneself with one’s bondages and attachments. Everything false or asatya creates bondage because that takes you away from the truth or the ultimate reality. Paap also means to have your senses indulged not in the introspection of the ultimate reality but of the empirical world and compel you to identify oneself with the physical world.

Paap from the perspective of ‘Karma Yoga’ would imply not adhering to one’s duties. Paap can subtly be defined as any act that creates a ‘Karma Bandhan’ or attachments. Virtues and vices are secondary, the main thing that a yogi or Siddha fears is Karma Bandhana because virtues and vices are conquerable but not Karma Bandhan. Karma Bandhan has to be faced because it implies bondages. When a person is bonded with an idea, the person is sure to live up to that idea and act in such a way that is congruent with the bonded idea. Therefore, paap is subtle. It is the first stepping stone that ultimately leads to karma bandhan. It is like the seeds of karma, at the initial phases of seedlings, the seed can be uprooted. But when the seed turns into a big Banyan tree, the tree could be chopped down but it cannot be uprooted because its roots pierce the most impenetrable parts inside the earth. From the analogy of the seed, it is fair to conclude that the seeds are virtue or vice while karma bandhan is the whole tree. It is always better to deal with the seeds in the initial phase than to chop the trunks later.

As per ‘Siddha Dharma’, Lord Krishna is also believed to have perfected Paap Mochini Yogmaya. He was initiated into this wisdom by his great Guru Sandipan Muni. Therefore, Lord Krishna due to the perfection of Paap Mochini Yogmaya is portrayed with peacock feathers in his mukut or crown. Therefore He imbibes the virtues of Devi Yogmaya and is portrayed blue and in rajas mode.

From an alternative perspective of ‘Siddha Dharma’, the Paap Mochini Yogmaya wisdom can turn Nara into Narayana. The difference between the wisdom of Nara and of Narayana is the grace Yogmaya. When Nara imbibes Yogmaya in them, he can reach to the state of enlightenment and get kala like that of Narayana. It is also because of Paap Mochini Yogmaya, Lord Krishna talks about performing one’s duty perfectly. Most of His ethics are based on adhering to the Dharma.

As per ‘Siddha Dharma’, the Paap Mochini Yogmaya tradition has always existed from time immemorial. When the Devatas committed paap, they used to either pursue the path of tapa (austerity or penance) or through Her worship. This wisdom was first revealed to Ma Parvati by Lord Shiva himself and through Ma Parvati, Rishi-Muni, Siddhas, and Kaulantak Peeth received it.

The ‘Paap Mochini Yogmaya’ wisdom was reinstated in the modern-day spiritual world by the eternal Peethadhishwara of Kaulantak Peeth, Mahasiddha Matsyendra Nath Ji. He revealed the sutras of the ‘Paap Mochini Yogamaya’ to one of his disciples Mahasiddha Sapurna Nath Ji and from him, the Siddhas of Kaulantak Peeth received and continued it in their lineage succession.

The literature of Paap Mochini Yogmaya

As per ‘Siddha Dharma’, her authentic text is ‘Paap Mochini Kalpa’ which is available in the library of International Kaulantak Siddha Vidhya Peeth(IKSVP) only for reference purpose. 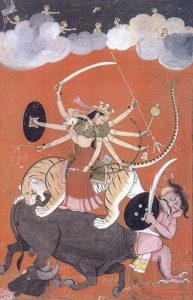