As per “Siddha Dharma”, the Ruru Bhairava Sadhana is done to elevate one’s level of consciousness and also to move forward in the path of spiritual pursuits.

As per “Siddha Dharma”, the word Ruru implies the combination of two words, Ru and Ru. Ru implies Rudra while Ru also means face. Therefore, the amalgamation of both words gives the meaning that Ruru Bhairava is the Bhairava who has the face of Rudra. He has the face of destruction in him. He has two main fold purposes, to destroy and to create. He is the force that has the potential to destroy and then recreates.

As per “Siddha Dharma”, he is believed to be a Bhairava who is bluish-black. His complexion is matte black but with a slight bluish touch. The black body implies infinity and infinite powers while the bluish color implies divinity and depth. His bluish-black complexion implies that his path is the tamasic path to divinity.

He is portrayed with four hands which respectively hold a deer, kharpara or skull cup, axe, and sword. The deer in his hand implies his anti-stillness nature because a deer is always playful. It also implies the mastery over the five senses because in tantra deer is the symbol of arts, senses and playfulness. The skull cup means mastery over one’s intellect and using one’s intellect as one’s own weapon. The axe implies that he has the potential to severe all forms of bondages and attachment from the root. The sword means that he is warrior in nature and subdue of all forms of nature.

The origin story of Ruru Bhairava

As per “Siddha Dharma”, once when Aghoreshwari Kurukulla was seated with Swachhand Bhairava, she asks her lord about the dissolution of the universe and what happens to the creation, or the Prakriti or the supreme energy. Lord Swachhanda smiles and replies that there have been numerous times in the past where the universe has been annihilated.

A Guru-Disciple tradition of Ruru Bhairava

As per “Siddha Dharma”, the guru-disciple tradition of Ruru Bhairava starts from lord Shiva himself. He passed the knowledge to Mahasiddha Nandi Nath and from Nandi Nath, various Mahasiddhas learned the wisdom and infused the wisdom in the Kaulantak Peeth tradition.

As per “Siddha Dharma”, Mahasiddha Matsyendra Nath is believed to have reinitiated the Ruru wisdom in the age of Kali-yuga after it had gone to a great hibernation. 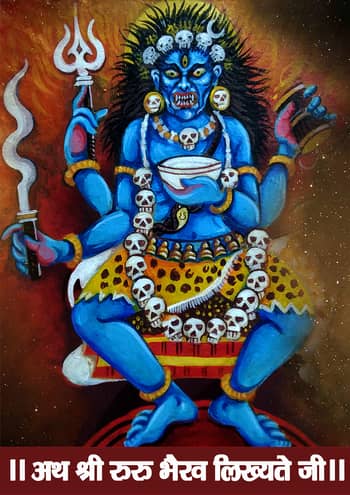