As per “Siddha Dharma”, Tri means three and Shareera means body. Siddha sees the human body as not just a body made of flesh, bones, etc. but they have also realized that the human body is not just one body, but three bodies within a single body. These bodies were called Tri Kāyā earlier and now they are referred to as Tri Shareer. The Tri Shareer is also seen as another categorization of Pancha-kosha or the five sheaths which cover the ātmā.

The three kinds of human bodies

As per “Siddha Dharma”, the three kāyā or shareera are Sthūla, Sūkśma, and Kāraṇa. Sthūla is the gross physical body. It is this sthūla shareera that is commonly referred to as the human body. It is made up of flesh, bones, and other gross physical building material. It is empirical and is tangible. This is the body most humans identify themselves with. The “Siddha Dharma” believes that as long as humans identify themselves as their bodies, they are pashu (animals) because the pashus do not have the idea of walking into the path of realization of the soul.

The sūkśma kāyā is the subtle body or astral body. It is responsible for the psychological and emotional functions of our being. This is the mental ideation of the body. This is responsible for praṇa, manas, buddhi, etc. It is the body of desire and vital forces. When a person ascends from sthoola shareera to sookshma shareera, the person also ascends his consciousness level from Pashutwa to Devatva i.e. from animal instincts to godliness.

The third shareer or kāyā is the Kāraṇa shareera. Kāraṇa shareera is the causal body. This is the body that drives the prarabdha and other kinds of karma like sanchita karma. This is the seed of the other bodies. Both avidyā or ignorance or anti-knowledge and vidyā or knowledge can act on the kāraṇa shareera. It can carry the impressions from the past life. The Siddhas are the ascetics who have realized the karana shareera and perform the actions without the actions or the fruit of the action impacting their karana shareera. Therefore, they are always free because their karana shareera is also free from worldliness. The person then attains the state of Siddhatwa. The Siddhas are both materialistic as well as spiritual because no actions there can create karma or bondages or negatively impact the karana shareera.

The “Siddha Dharma” has further condensed the five bodies into three bodies, sthoola, sookshma, and karana shareera. The prana, manomaya, vigyanamaya is infused into sookshma shareera while the anandamaya kosha is related to karana shareera.

As per “Siddha Dharma”, without the understanding of the three bodies, it is difficult to gain a deeper understanding in the fields of Yoga and Tantra. The tri shareera constitutes basic knowledge of sadhana world. To accomplish the understanding of Tri Shareer, one can follow the yogic way, tantrik way, or the way of mantra. Tri Shareer knowledge system of Siddhas is the fundamental modus operandi based on which all wisdom forms like yoga, mantra, tantra, yantra, etc are structured.

As per “Siddha Dharma”, all the traditions of Tri-Shareer could be traced to Lord Shiva. He was the first guru who revealed the tri-shareera to Rishi/Munis. The wisdom was later revealed to modern-day society and the Siddhas by Mahasiddha Matsyendra Nath Ji through his different disciples. 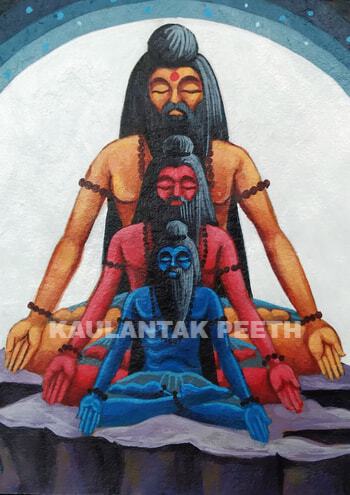