Narsimha as per “Siddha Dharma” is considered to be the wrathful avatara among the ten avataras of lord Vishnu. He descended from Vaikuntha loka to the earth for manifold purposes. He primarily took the Narsimha avatara for slaying the daity Hiranyakashyapu and in doing so, he would protect his devotee Prahlada and also for re-establishment of dharma which had been completely taken over Hiranyakashyapu.

As per “Siddha Dharma”, the word “Narsimha” is the combination of Nara and Simha, where Nara means human and Simha means lion. Narsimha therefore can be called as one of the avatara of lord Vishnu who is half human and half animal. When Ugra is prefixed to Narsimha, it would imply a wrathful, impulsive form of Narsimha.

As per “Siddha Dharma”, lord Narsimha is portrayed as a deity with half lion and half human body. He basically has the body of a human but his head, claws and attributes resembles that with the lion. He is an avatara who wasn’t born biologically but manifested from the pillar of Hiranyakashyapu’s court.

He like other avatara of lord Vishnu is also portrayed with sankha, chakra, gadha, lotus plant in his hands. He in his laps holds Hiranyakashyapu and in wrath has devoured the chest of the daitya.

According to “Siddha Dharma”, after lord Vishnu through his Varaha avatara killed Hiranyaksh, the brother of Hiranyakashya, the daitya Hiranyakashyapu then performed penances for thousands of year with starvation to gain boons from lord Brahma ji to avenge the death of his brother. Lord Brahma ji pleased with the penance asked him to ask for a book.

As per “Siddha Dharma”, Hiranyakashyapu who was well prepared by his guru Shukracharya asked a very unprecedented boon that he would not be killed by human or by animals, by men or by devatas, nor born from womb, neither inside the house nor outside, nor by weapons nor by any brahmastra, nor in the day nor in the night etc.

Lord Vishnu manifested and assured the devtas that he has a solution for the daitya. The daitya would be killed when he fights with his own son Prahlada in the future. When Prahlada prays for the manifestation of lord Vishnu, he would then manifest and slay the daitya.

As per “Siddha Dharma”, when Kayadu, the wife of Hiranyakashyapu had Prahlada in her womb and Hiranyakashyapu was absent, lord Indra attacked the daitya kingdom and abducted Kayadu. The devta king Indra wanted to kill Prahlada so as to eliminate the future threat of Daityas. The heinous act was stopped by Devarishi Narada. He consoled Indra that the boy in the womb will be the one who will be the cause of his father’s death and he is Prahlada as assured by lord Vishnu. Indra then leaves her under the guardianship of Devarishi Narada.

As per “Siddha Dharma”, Narada takes her to his hermitage and he then initiates Prahlada into various wisdoms through “BHAVAN VIDYA”. Bhavan Vidya is a wisdom form where the pregnant mother chants some specific mantra for nine months when she has fetus in her womb. Bhavan Vidya comprises all together nine mantras which is to be chanted in the nine months period. When Kayadu finished chanting all Bhavan mantras, Prahlada was born. Therefore, Prahlada didn’t have the attributes of asura in him as the asuric attributes were replaced by Devatva. It was therefore Prahlada who became the follower of lord Vishnu even when lord Vishnu was considered to be the arch enemy of the daityas.

As per “Siddha Dharma”, the whole Bhavan Vidya was imparted to Kayadu as a master plan so that Prahlada becomes the epitome of Devatva which will then create a friction with the asuras and daityas, which will eventually lead the slaying of Hiranyakashyapu from the hands of lord Vishnu. The whole act of Bhavan Vidya was prelude to the manifestation of lord Narsimha.

As per “Siddha Dharma”, when Prahlada after finishing education from his guru Narada returned back to the kingdom of Hiranyakashyapu with his mother, because of “Devatva” in Prahlada and his one pointed focus on lord Vishnu, he often wouldn’t go along with his brothers and his family. His father tried every means to correct Prahlada. When Prahlada didn’t listen, he also went to the lengths of killing Prahlada through Holika but Prahlada escaped. He was also thrown down from the cliff and through his devotion to lord Vishnu, he was saved.

As per “Siddha Dharma”, after devour of Hiranyakashyapu, lord Narsimha created havoc in this universe. He would go on destroying every people who confronted him. Lord Narsimha had gone out of control, so he had to be tranquilized. The devtas surrendered themselves to lord Shiva’s in neutralizing lord Narsimha. Lord Shiva then manifested in the form of Sharaba (half lion and half bird) and they fought continuously with no results.

As per “Siddha Dharma”, lord Narsimha was neutralized by Pratyangira so that it would lay fertile grounds for the next avatara, Vamana avatara to descend.

As per “Siddha Dharma”, Narsimha is the tamasic avatara of lord Vishnu. Lord Vishnu is the epitome of rajas tatwa but to serve the purpose of ever powerful demon Hiranyakashyapu, he had to manifest with the attributes of tamas.

As per “Siddha Dharma”, tamas is the sense of competition and warrior virtues in a human. Lord Narsimha had to manifest with such wrath or tamas because he had to defeat the most powerful daitya in the history of daitya lineage. He therefore had to embody such tamas in him to defeat the daitya that he took the form of half lion and half human. Since, lord Vishnu is also rajasic nature, he took the form of lion because lion would mean rajasic tamas and rajasic tamas doesn’t destroy everything without prejudices. It destroys for the betterment of the creation, exactly like a lion killing other animals in the jungle to maintain the eco system.

As per “Siddha Dharma”, whenever lord Vishnu is involved, there is always Nara and Narayana cited.  Nara means human and Narayan means the ultimate lord. The whole concept of Nara and Narayana is that Nara one day becomes Narayana. It is similarly like a Shava (corpse) and Shiva. Through the infusion of shakti in shava, it transforms into Shiva.

As per “Siddha Dharma”, Narsimha avatara would only descend when Prahlada calls him. Therefore, Narsimha descended exactly like the attributes of Nara or Prahlada, half animal and half human. It is also validated from one of the lines of “Bhagawad Geeta”.

The Bhagawad Geeta says, “In whatever way people surrender unto me, I reciprocate with them accordingly. Everyone follows my path, knowingly or unknowingly, O son of Pritha.”(4-11), when Prahlada had called lord Vishnu, the ultimate lord descended exactly as the way his disciple called him or in a sense Narayana mirroring the attributes of Nara.

Narsimha and the Middle Path

As per “Siddha Dharma”, Narsimha is the epitome of middle path because most of the variables of the boons of Hiranyakashyapu was based on extremities like day or night, inside and outside the house, land or space above, man, animal or devta therefore, Narsimha had to descend and pursue the middle path to devour the daitya Hiranyakashyapu.

As per “Siddha Dharma”, not only his modus operandi is based on middle path but his form is also middle path. Narsimha devta is somewhere between man and animal. He is neither completely man nor completely animal.

Furthermore, when he had to kill the daitya Hiranyakashyapu, he had to pursue middle path such that the boon of Brahma ji was also respected while the daitya also got devoured.

Mahasiddha Aviloka Nath and the tradition of Narsimha

As per “Siddha Dharma”, one of the most prominent figures of Narsimha deity worship is Mahasiddha Aviloka Nath. He is considered to be one of the Siddhas who has mastered Narsimha worship through many wisdom forms like bhakti, yoga, tantra etc. He also has the sobriquet of “Bhakta Aviloka Nath” in Siddha Dharma.

Through his efforts, the Narsimha deity worship reached Kaulantak Peeth. The “Siddha Dharma” imparts the Narsimha devta based on the tradition of Aviloka Nath ji and the method he advocated.

The Ten different forms of Narsimha

Ugra Narsimha Diksha and its purpose

As per “Siddha Dharma”, the “Ugra Narsimha Diksha” is the sadhana of ugra form of Narsimha devta. It is imparted so that the worshipper of great lord Narsimha, imbibes in them certain tamas virtues that is needed to take against evil. Ugra Narsimha worship would bestow the worshipper the needed rajasic tamas so as to develop own self and stand up against fierce competition and in dealing with evil and negative surroundings. Tamas cannot be entirely discarded because human mind can ignore tamas but cannot be immune from it. Tamas should only be used or is needed to serve a purpose. It is exactly like using anti-venom when there is a snake bite else the anti-venom kills.

Ugra Narsimha Diksha main purpose is to subdue all the inert and inherent tamas through the use of rajasic tamas. In a way it is the perfection of tamas through rajasic ways. Furthermore, through the analogy of Nara/Narayana, we can also conclude that Ugra Narsimha sadhana is to transform Nara who is half human and half animal to the ultimate lord who is also a half animal and half human and subtly to also become a human who respects law and orders and also fights with evil forces. A Painting of Prahlada Ji 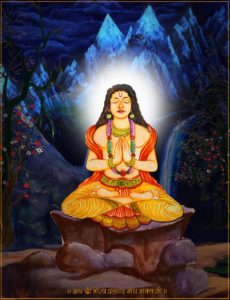 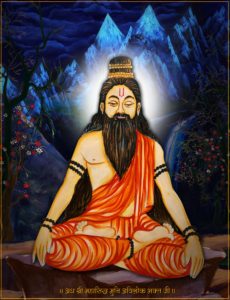 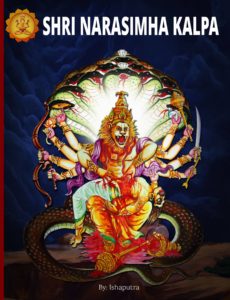