The “Yogasana Mala, vol. i” book is an entry level book of ‘Siddha Dharma’ tradition to present Yogasana as it is. It contains fifty asanas explained in a very condensed form through pictures of His Holiness Kaulantak Peethadhishwara Mahayogi Satyendra Nath Ji Maharaj, who himself is performing the asana for illustration.

The book is written and compiled by the beloved disciple of His Holiness, Ma Priya S. Nath. She took the initiative to present the yoga wisdoms for aspiring yogis. She was motivated by the fact that His Holiness maintained hand written spiritual journal in his sadhana period and it was in the verge of being destroyed. So to revive it all, she has taken the initiative to publish it for the betterment of the aspiring yogis.

This book is based on some of the yoga excerpts from His Holiness vast spiritual journal. The other disciplines inherent in it are also in the pipeline to be published in coming days. This book is believed to have started the snow ball rolling process for publishing books in future.

The book is exclusively based on yogasana. The book prescribed and explains fifty asanas for any new aspiring yogis. It is a book of revelation about yogasana. The asanas are explained with its procedures, method, respiration and the precautions that should be taken while performing the asanas. The modus operandi of the asanas and the list are explained in upcoming sections.

No book of yogasana ever prescribes the numbers, colors, meditation, scents related to yogasana. This variation is only exclusive to ‘Siddha Dharma’ tradition as it is an authentic yoga lineage. The yoga learned from the yoga studio is not pure, but arbitrary because people mix something of their own in it. The contents of the book are pure contents of ‘Siddha Dharma’.

The writer has tried her best to explain its content with authenticity. She has directly learned all the contents from His Holiness Kaulantak Peethadhishwara Mahayogi Satyendra Nath Ji Maharaj, the epitome of ‘Siddha Dharma’.

Every asana has to be performed in a systematic manner. The word ‘perform’ is mainly used in the book to explain the practice yogasana. The ‘Siddha Dharma’ believes that there is substantial as well as procedural difference on how to practice a yogasana.

As per ‘Siddha Dharma’, Yogasanas are not exercises. Yogasanas differ from exercises because unlike exercises, yogasana has a metaphysical element in it. The metaphysical element of yogasana is ‘Yoga’ that means oneness. Yogasana are performed to achieve the state of Yoga and not just to keep the body healthy. ‘Siddha Dharma’ is a rajasic dharma and ‘Yoga’ is also a rajasic discipline. The ‘Siddha Dharma’ while practicing any asana performs it through aesthetic. It uses beauty, appreciation, gratitude to perform a yogasana.

Some of the modus operandi of the asanas is described below.

Every asana has a procedure. Whenever one performs an asana, they do not haphazardly perform it. They have to be correctly performed through both physical and mental process. This book describes about the procedure to perform any asana.

The book describes the correct respiration process to perform any asana. Breathing is always a key to perform asana perfectly. As per ‘Siddha Dharma’, the breathing pattern prescribed might be simple but is beneficial manifolds.

‘Siddha Dharma’ believes that to perform any asana, meditating at some chakra or point in the body is mandatory. If meditation is subtracted from yogasana, the asana becomes an exercise because the ‘Yoga’ part will be absent.

‘Siddha Dharma’ believes that every yogasana has a taste related to it. The aspiring yogi’s is prescribed to meditate on that particular taste of asana, for its perfection.

As per ‘Siddha Dharma’, all the asana has its color. The color is also linked with kundalini shakti. The book has prescribed ‘colors’ so as it becomes easy for the aspiring yogi to perfect the asana in a very short time. 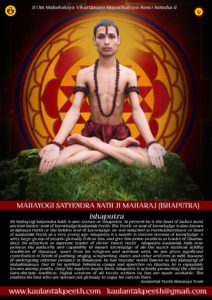